It’s no longer yours!

As you grow up, you learn quickly that some things are yours and some things are not yours - but you would like to have them! It is very difficult to get rid of the idea of “possession”. Different cultures do differentiate and change the meaning of this term, but everyone knows that one only takes care of one’s possessions more carefully when they are personally owned. For a long time in the US, slaves were part of people’s possessions. Now that idea may be considered uncivilized, but there are plenty of human beings who still own some others, regardless of whether it is legal or not. How is it that this subject came to my mind when we had just arrived in Taiwan after my leaving it for seven years? Well, it was because we stayed in “my” room. When Janice and I brought baby Margaret back, the room was no longer mine! Ed and Kai were ten years younger than Dean and I, that is almost one generation apart. Our rooms had changed hands to our younger siblings. (See sketch of our house below.) I labeled Tom’s room and Dean’ room as they had been before I left. But this was no longer correct! 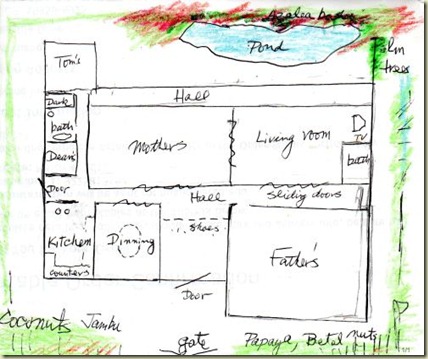 As a matter of fact, the whole house is no longer there any more! It was torn down a few years after my father came to the US –but that is a story for later. in 1969, we enjoyed the house in the back room. It was the base for all our travel in Taiwan. This was a beautiful Japanese style house, with azaleas plants in the backyard and many other fruits, such as coconuts, papaya, jambu, and betel nut in the yard. Yes, there is a fruit called Jambu, just Google it so you can see what it looks like!