An unexpected benefit, when I was working at Great Lakes Research (GLR), was getting to know a Chinese family. Dr. Hsu was a very respected section head working at GLR. His family had moved down from Chicago when GLR was relocated.  Not too long after I started my summer job there, I was invited to his home and had dinner with them. This relationship continued for decades even after I moved back to Johnson City to teach at ETSU. They continued to treat me like a family member, and certainly we had some memorable ping-pong games in their basement!
They took me to Roan Mountain to see the Rhododendrons blooming and we had picnics there. That was the first time that I started to appreciate the beauty of the mountains in Tennessee. The following pictures were taken in 1963. 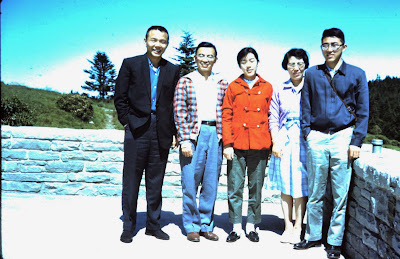 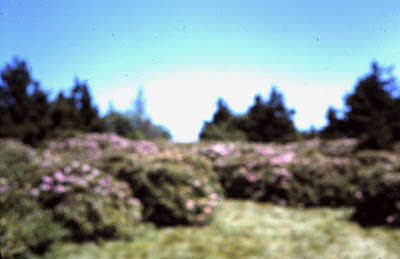 Posted by Just having FUN at 5:20 PM No comments:

At the end of my first year in the USA, I joined several other activities besides those that I reported earlier. The important one was “international folk dancing”, or in short, folk dancing. This was a brand new to me. At the beginning, I only went there on Thursday nights occasionally. But at the end of my first year, especially at the beginning of summer, I became a regular attendee. It was nice to have some exercise in an air conditioned room.  At that time, only a few buildings on campus were air-conditioned. Our apartment was not at all air conditioned; going out to a cool place in the summer was certainly an enjoyable event! I learned quite a number of dances quickly, and I also got to know a few more friends, including a few females!
Another activity I participated in was the student affiliate group of the American Chemical Society, or the Chemistry Club. We did not have a lot of people in the group, but I was popular there as I could help students with their assignments in Physical Chemistry. The following picture was taken of the group for the ETSU Annual. Frank Newby, a brand new faulty member in the Department on the right side of the picture, was the sponsor of the club.

Finally, I went to swim quite a bit at the University swimming pool. Many times I went with Maureen Haggerty, who was Chemistry major planning to become a nun, which she did after her graduation. Unfortunately, I do not have a picture of our swimming activity but she was quite a swimmer. She was right in the middle front of the picture above.
Posted by Just having FUN at 10:35 AM No comments:

Great Lakes Research Company was located originally in the Chicago area, but it moved to Elizabethton, TN, in 1962. I was offered a summer job there in 1963. It paid a very nice salary by local standards. Since I did not own a car, I paid another summer employee to pick me up every day. It was very convenient for me. The job was relatively easy, doing electrolytic regeneration of chromium salt. This research project was similar to projects in the academic setting. My boss was a Hungarian chemist, Louie Yoo (back left in the picture), who had escaped from the Russian invasion in 1956. Frank Snodgrass (back right in the picture), a Chemistry graduate from ETSU, was also in the group. We quickly became good friends. Since he already had a group of friends, including a local young man named Gary Spear and a Venezuelan student, Richard. I quickly joined the group. We spent most of our weekends together, playing cards or watching drive-in movies. 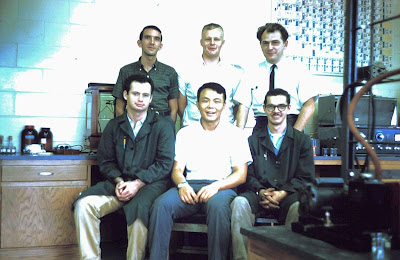 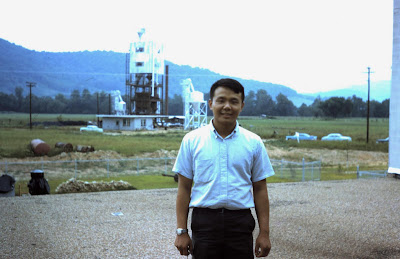 The Math Department had another opening for the summer. It involved teaching a course on Differential Equation in the evenings. Since I had done well on several courses I took there in the Department, Dr. Hartsell, the Department Head, offered me the job, which I happily accepted. So from a teaching assistant, I became an instructor! With two positions during those three months, I was feeling very rich!
Posted by Just having FUN at 4:51 PM No comments:

Jim Gilland and the Smoky Mountains

At the end of my first year at ETSU, my friend Jim Gilland invited me to visit his home in Maryville, TN. It was actually the first time that I had ever spent a night in a friend’s home. In Taiwan, there was no chance that we could have such an overnight experience! His family treated me with loving kindness - a very unforgettable experience. I remember that I was shocked to see Jim drink one whole gallon of raw milk, right after milking their family cow! 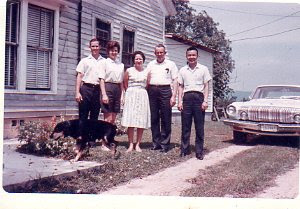 Then Jim drove me to the Smoky Mountain National Park, which is not far from his home. We spent a whole day there, including walking some trails. And we even went to see the show “Unto These Hills”, which is about the experience of the Cherokee Indians when they encountered white men for the first time in the area. That encounter resulted in a “Trail of Tears” all the way to Oklahoma. Jim was the first person to show me the Smoky Mountains, which is one of my favorite places in my life. I have certainly enjoyed many spots in this National Park. 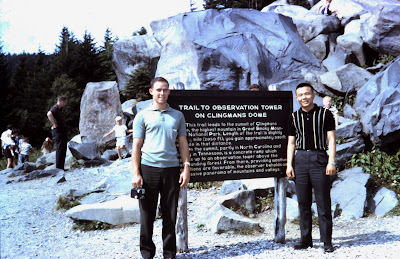 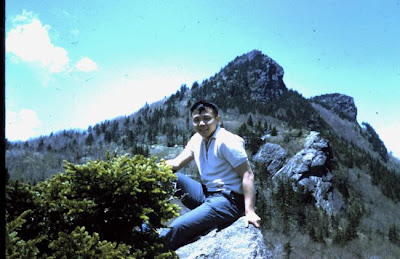 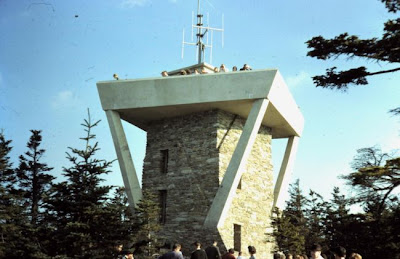 Posted by Just having FUN at 12:40 PM No comments:

When one passed the age of 22, many friends started to get married. Especially during the sixties in the southern United States, high school women graduates continued to go to college for one big reason: to find a man to marry! I do not remember how many weddings I attended during the year after I got to Johnson City - quite a number! I do remember that I sang in a wedding when a classmate in one of my math classes got married. Her name was Patsy and her family lived on a farm. I had a good time visiting her family farm in the country near Johnson City during the two days for the rehearsal and wedding. I was also the best man for a Chinese couple‘s wedding in the Central Baptist Church. Certainly I attended a few other weddings. 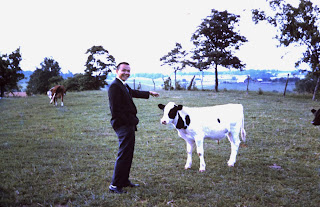 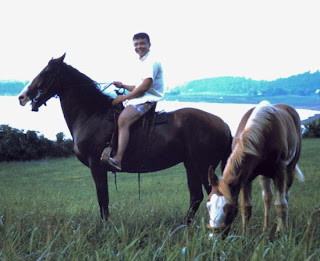 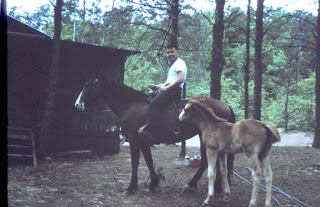 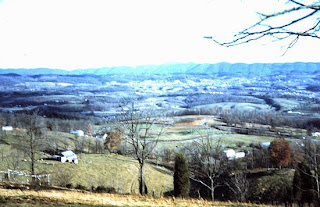 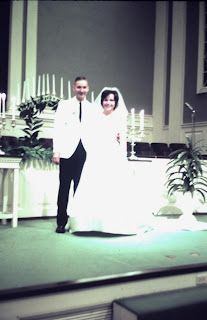 Posted by Just having FUN at 2:52 PM No comments:

At the end of my first semester in Johnson City, I met three Chinese students.  One was another Chemistry graduate student. I did not see him much as he was paying his own way and therefore did not hang around in the department very often. His girl friend, who was in the Arts department, was the second Chinese student I met. The third Chinese student, Kuan Youn-ming（ 关永民）, was an undergraduate student who did not yet have a major! When an apartment became available right next to campus, Kuan asked me to join him and rent it together.  This move was great as we could cook together, which saved quite a bit money for both of us. It turned out to be even better for me, since Kuan had learned a lot about cooking during summers when he worked at various Chinese restaurants. He later owned some famous restaurants in Chicago and was a very successful business man. Here we were sitting in the front of our apartment in the following picture. The building was later bought by the University and destroyed. 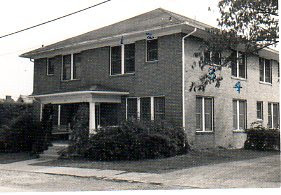 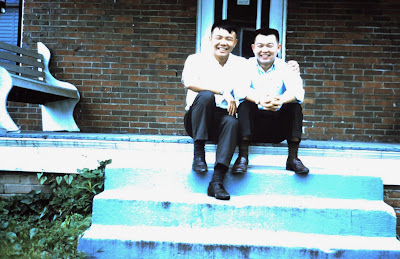 Posted by Just having FUN at 3:18 PM No comments:


For every foreign student, ETSU foreign student office tried to match a host family to benefit both sides. The Schulkens were assigned to me. They lived in Kingsport as Mr. Schulkens was working for Tennessee Eastman Chemical Company. They provided me a home away from home. Their two children, Jane and Rod, were twelve and ten at the time. They were interested in learning something about China. They had me for my first Thanksgiving dinner, and they treated me to many Sunday dinners at the Country Club. They gave me a glimpse of how a chemist family lived in the USA. It was very nice for me! I kept in communication with them for a long time .Jane even took my General Chemistry class later at ETSU. 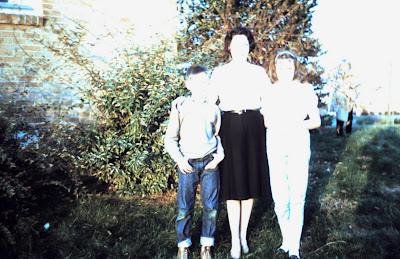 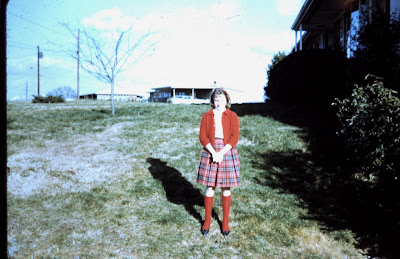 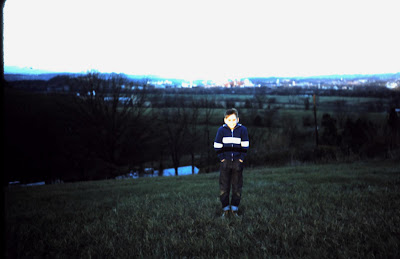 Posted by Just having FUN at 4:52 PM No comments:


After only a few weeks, the distance I had to walk finally forced me to change to another room on the Tree Streets, which was only two blocks away from the campus. The landlord was an insurance salesman. Since I did not know anything about insurance, he taught me "all" about it. I had a hard time to understand why people wanted "life" insurance. If you die, why should one need more money?

The landlord was part of a devoted Baptist family. I wondered whether he really trusted that God would take care of him. He told me that he did not want to bother anyone about his affairs. We had quite a lot of good discussions. To me, he certainly had too much to worry about in this world, which is not even supposed to be his home. The words of the hymn "this world is not my home, I am just passing through" kept coming into my head. What does this mean? The following picture was taken on his front yard: 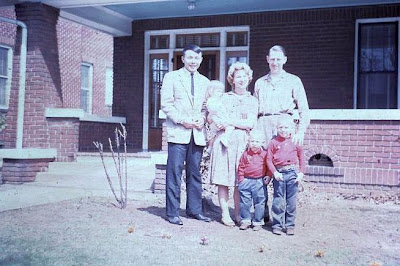 Posted by Just having FUN at 9:09 PM No comments:


Not too long after I arrived in Johnson City, the color change in the trees amazed me. I did not remember having seen it in Nanking. Perhaps I was not paying any attention or maybe I did not appreciate color change when I was young. There was certainly not any color change in subtropical Taiwan! The brilliant color just startled my senses.

The neatly mowed grass everywhere impressed me also. The grass in the fields in Taiwan was cut manually. It was generally not quite even, never looked like a crew cut worn by boys in basic training camp!

I do remember the snow and cold when I was in elementary school in Nanking. The snow seemed much more white in Tennessee or, at least, whiter than I remembered.

It is too bad that all my pictures taken during that time are not very clear. However, I hope you can imagine what I experienced. The following were all taken on the ETSU campus: 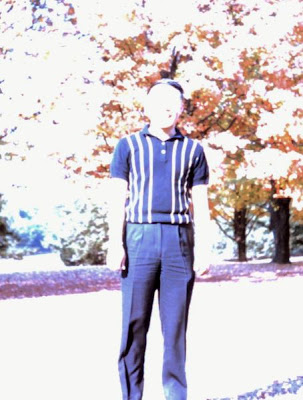 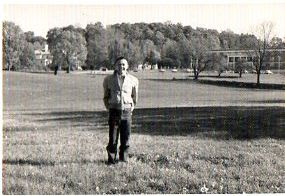 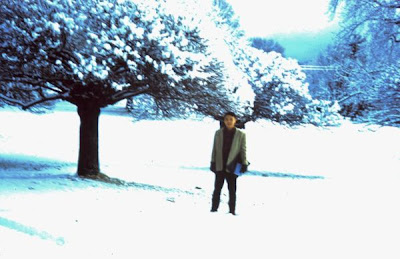 Posted by Just having FUN at 9:06 PM No comments:

My First Room in the USA


I lived at home all during my college life. When I got to Johnson City, TN, it was the first time that I left my parents and rented a room by myself. The room belonged to a retired Baptist minister and his wife. The house was a big brick house with four bedrooms and one bath upstairs, all unused by them. They liked to rent out the space to four "boys", to supplement their income. However, since it was a bit distant from the main campus, only two rooms were rented out. I only had to share the bathroom with one undergraduate. The picture below shows the room and my landlady with her daughter. 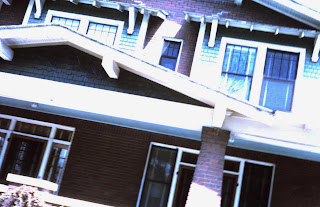 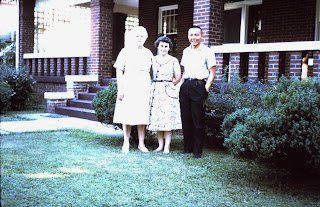 Posted by Just having FUN at 4:15 PM No comments: