As I told you before, quite a bit of my free time was used in singing, either practice at home when my father was out, or rehearsal at Friendship Corner oor at Truth Lutheran Church. Since my father did not want me to waste my time to sing, my practice at home was done when he was not at home. It was quite nice to have my own room at the back of the house, no one bothered me there. I could even go over my sheet music and ham the songs without alarming anyone in the other parts of the house. Initially, the Truth Church choir was quite weak, (see picture below). 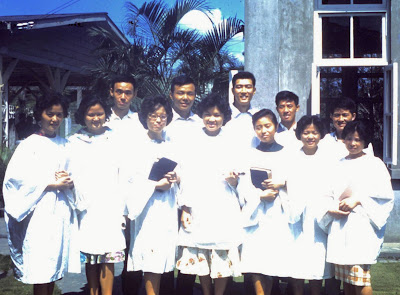 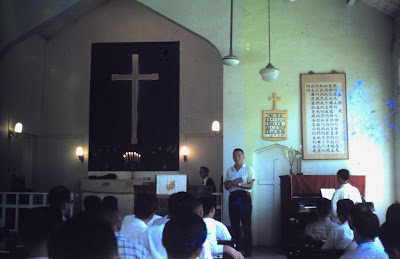 Later as more Hong Kong students with strong voice joined the choir, it became quite strong. With the super direction from Mr. Kao, we tackled tough pieces, including the Christmas part of Handel's Messiah. I regularly had sung some solos and other special music at church as well. Virginia Lau was one of my regular duet partners. She was from Boneo, had a thick rich voice. Later, she went to study music in Canada. 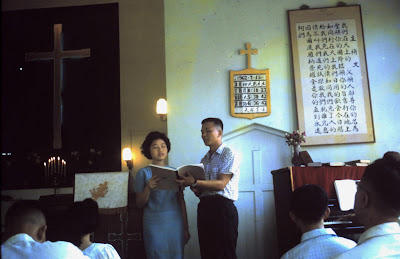 On a particular occasion, three chemists tried a mixed trio. Hong Hwei-shung(洪辉雄, I lost contact after gradution) was my classmate, he played piano. Lin Jun-Long（林 贱隆, he was the Chair at the Chemistry Department at Boston Collega）was my Physical chemistry teaching assistant (TA at Taida), he played violin. We had a ball to practice and performed later with success! 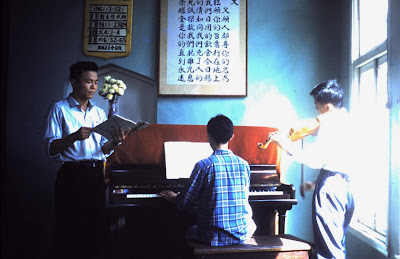 Posted by Just having FUN at 2:51 PM No comments:

Another picture with Sherman


This is the picture taken with Sherman Tang at Truth Lutheran Church just before he left for the US. From 1955 to 1970, the best opportunity for college graduates in Taiwan was to go abroad to study. Most graduates went to the USA. A few went to Germany, England or Japan. Science and engineering students were generally able to get support from scholarships. Sherman was planning to study Library Science, so he had to support himself. That was extremely difficult since the US$2400/year tuition and living expense was an astronomical figure for most citizens of Taiwan. Students in that situation had to work in the summers to make the amount. Most people had to borrow the money for the first year in order to show the US Embassy officials that he or she had the money in the bank before a student visa could be granted. 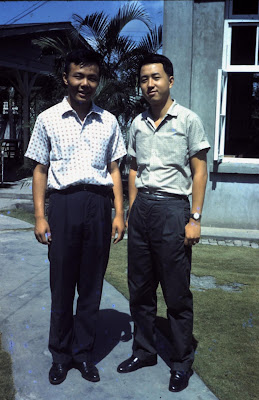 Posted by Just having FUN at 1:59 PM No comments:


While color slides were developed quite a while ago (1935), it was not until the end of the nineteen fifties that I was able to use them as they were prohibitively expensive! And I did not develop them into pictures until much later. At the end of 2010, the last commercial slide developing store was finally closed. Slides will have only historical value, if any, in the future!

I will show you now some of my slide pictures which were taken during the period from 1958 to 1962. The cherry blossoms at Yangming Mountain were very colorful, and other colorful flowers were also attractive, as you can imagine. 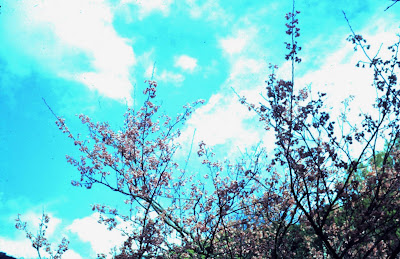 Miss Jones surely was happy amid the azaleas bushes. 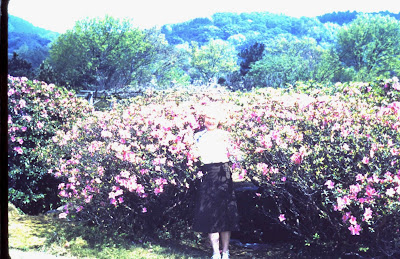 My father truly enjoyed the outdoors all of his life, even though this is not the best picture! 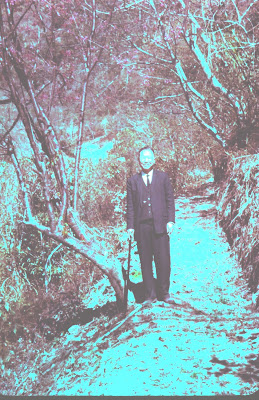 Posted by Just having FUN at 4:19 PM No comments:


Starting in Junior High school, we learned quite a number of Propaganda songs. We repeated these songs during the years we had military class. Therefore we were familiar with them enough to sing them by heart, any time, any place. I will try to translate one of them here to give you a taste of what we went through when we were being conditioned by Chiang's government. The following song was well known in the fifties and was sung by every young student on the island. In Chinese it is:

中華復興,民國萬歲,中華民國萬萬歲!
My simple translation is below:

Recover our mainland, free our people.

Obey our leader, complete the revolution.


This is enough for you to have a taste of the propaganda flavor we experienced in those years. It is reported that there were more than three hundred songs like this. I wonder if we could calculate how much we gained or lost during these school years because of the time and effort we devoted to that propaganda! There are many papers discussing these patriotic songs (see for example:http://www.jimlee.org.tw/doc/doc1.pdf). If you like to hear the song and a bit more taste of our experience, please check this link: http://www.youtube.com/watch?=mo5jOYzk4ws&feature=related. There is another song on the web if you want more: http://www.youtube.com/watch?v=P8ZbcFSsqmQ&feature=related
Posted by Just having FUN at 2:35 PM No comments:


During the four years we were in Taida, we rarely used the front main gate on Roosevelt Avenue for entering or exiting the school, except for picture taking. The side gate on Hsin-shing South Road was the in-and-out door we used daily. The general classrooms on the right of the gate, as you enter from street, were used by us regularly during the first two years we were there. On the left side was the University Athletic Field, tennis courts first, followed by volleyball courts, and several basketball courts, where I spent quite a bit time during my four year tenure there. The Chemistry Building was on the left, not too far down street from the courts. The building was new when we entered the University; we spent our last two years almost totally in that building. It deteriorated quickly under the damp climate of Taiwan weather. When we took the picture below in our Junior year in front of the building it no longer looked new. 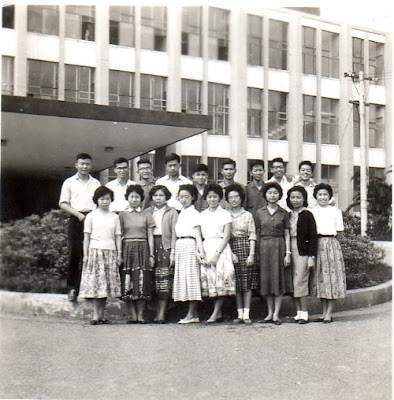 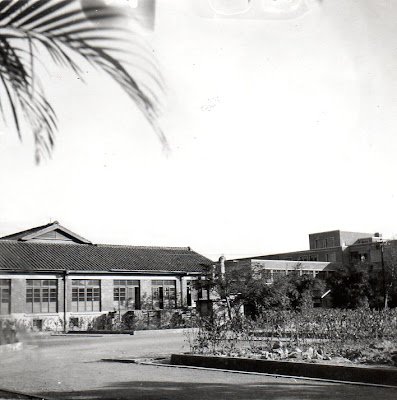 Posted by Just having FUN at 10:39 AM No comments:


Yang-Ming Mountain (阳 明 山）is located only a few miles from Taipei and has long been a favorite scenic spot in northern Taiwan. In the early days, few people had a private car, so going there needed some effort. Now it is very easy to reach there - to get some fresh air and to relax your tired body and mind.

My chemistry class went there several times in the four years of our college life. Friendship Corner group also went there a few times. The following pictures were taken there; as you can see, we played games and had picnics there. 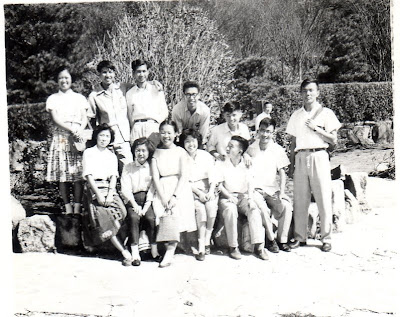 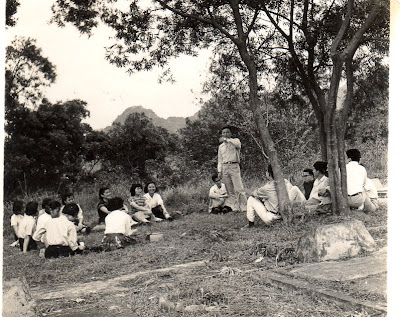 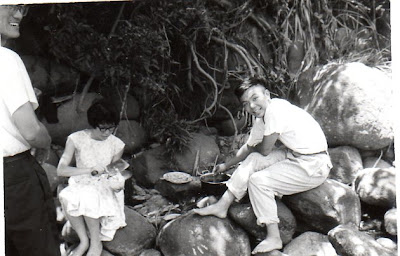 Posted by Just having FUN at 6:43 PM No comments:


It was very difficult to get a class together for any reason. Even the required courses were taken at different times by different people. I do not remember why we took this picture together by more than 50% of the classmates in early 1960. Here we were at the side of Truth Lutheran Church: 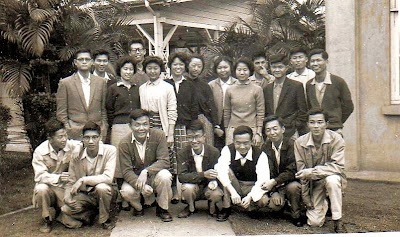 Posted by Just having FUN at 3:48 PM No comments:


Kenneth Pitzer was a famous Physical Chemist at the University of California at Berkeley. He came to visit Taida when we just started to study Physical Chemistry. He gave a lecture but I did not get much from it at all. After the lecture, the Department gave him a reception. Those who were brave and who were able to speak English joined him in the conference room, just to chat. Quite a number of us participated. The following picture was taken there. 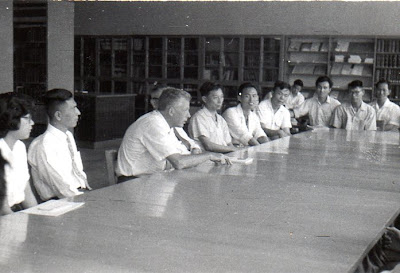 Later we all went to TsingHua Universiity with him and listened to another lecture. Once again I did not at all understand what it was about. We did take a picture to remember that occasion. 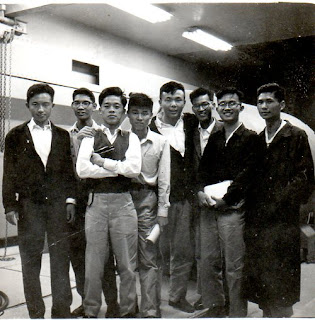 Posted by Just having FUN at 2:30 PM No comments: