Tainan literally means South Taiwan. The name Formosa has been used since the fifteenth century. It was used by westerners who traveled there. In Portuguese, Formosa  means “beautiful island”. In 1644, a Ming Dynasty general, Zheng Cheng-gong, attacked the Dutch people who had occupied the area and were living in Tainan. He defeated them soundly and drove all of them out of the island. There is still a temple to celebrate the event. Our second stop on our rail trip was at Tainan. We visited Ed’s in-laws there. Dr. Shih was then the research director of the Taiwan Sugar Research Institute. Our children also got a chance to ride some horses, which were provided at the temple built  to remember Zheng Cheng-gong. 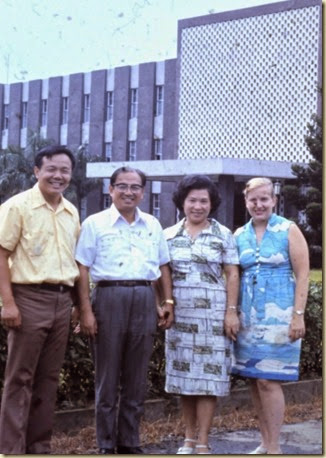 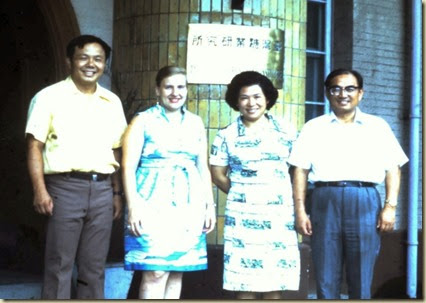 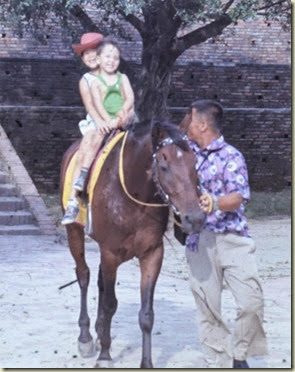 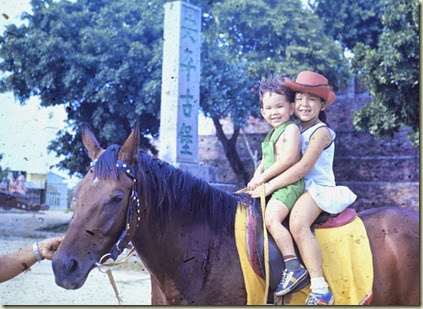 Posted by Just having FUN at 4:01 PM No comments:

While we were at Xi-tou, we went to the A-li mountain area for one day. A-li mountain has the highest peak in Taiwan. (There are about 25 peaks in the area above 2000 meters.) It is now a national park. We were there to visit just a few of the famous spots nearby Xi-tou, such as the God tree, a large tree which has a very old history. We did not go, this time, to see the famous sun rise and to visit the other peaks, which we had done before and would do later on other trips. 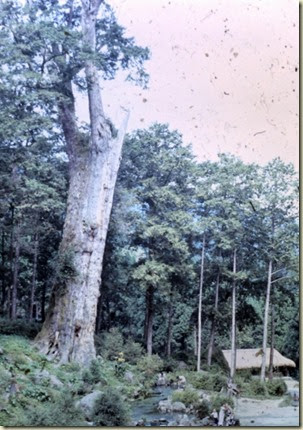 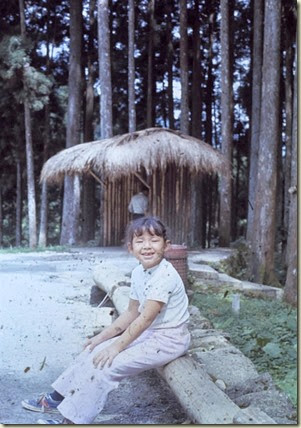 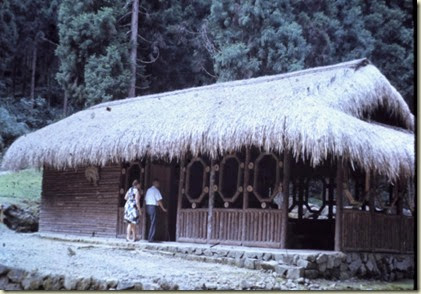 Posted by Just having FUN at 3:44 PM No comments:

National Taiwan University has an experimental forest located in the middle of Taiwan. It is a wonderful place and has now been developed into a “nature” study area (自然教育園區), the only one with substantial support on the island. Xi-tou means the “head” of a stream. There are a number of streams in the area, the name must come from them. It was blessed with good support from the government and the University, both personnel-wise and financially. This was the place for our first stop when we took the train ride south in 1975. My father went together with us. This was the first trip my whole family unit traveled with my father in Taiwan, three generations of us. We stayed in Xi-tou for several days, in the bamboo guest house built for the Chiang Family vacations, taking a walk every morning. One place we walked was to University Pond and our children took a picture on top of the bamboo bridge. 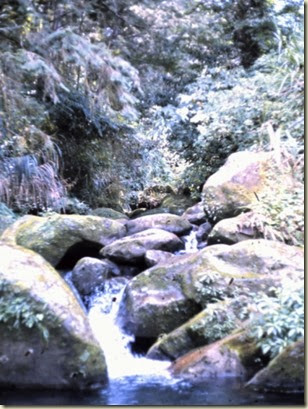 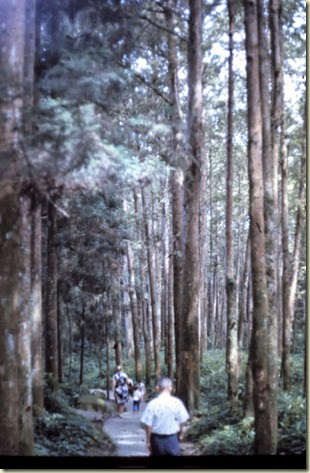 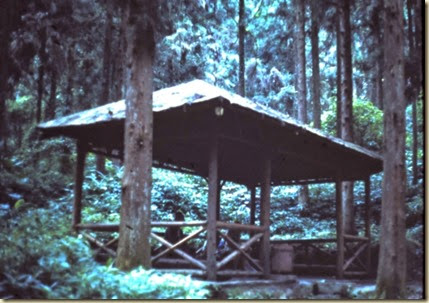 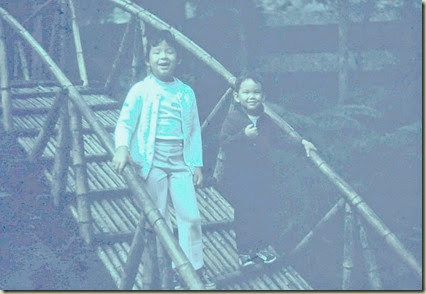 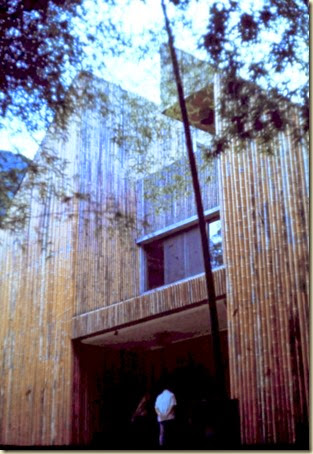 Posted by Just having FUN at 4:36 PM No comments:

A Train Ride in Taiwan

Trains have been a very convenient travel mode in Taiwan. Even before the mainlanders came to Taiwan, train tracks were already laid along the island from north to south. Over the years they have been improved continuously. We rode the train south for 12 hours the first time, shortly after we arrived in Taiwan in 1948. In 1975, Janice and I took our two children south for another visit via a much faster train. It only took us a couple of hours to go to the middle of Taiwan, Taichung. From there we went to Tainan, and finally to Kaoshiung, all via rail travel which we enjoyed very much. We stopped at each place to visit friends and relatives, spending several leisurely days, and we had a wonderful time. I do not have many pictures taken on the train. A couple of them below can give you a glimpse of our train rides. 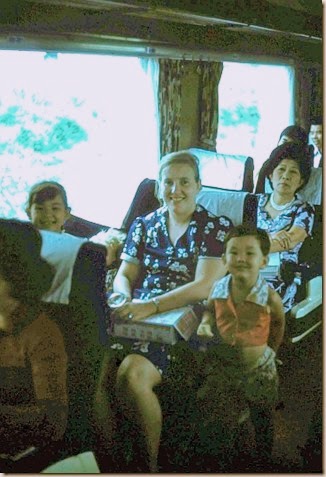 Posted by Just having FUN at 3:51 PM No comments:

Everything was  changing rapidly in Taiwan in the middle of the nineteen seventies. Economic growth is the main item people usually remember. However, other things were changing too, of course, from garbage collection to the new menus being offered by restaurants – there were many new and fancier dishes!  You name it, almost everything was changing rapidly.

My old junior high school in Banqiao had many old one-floor buildings when I was a student. I was there accidently in 1975, and saw that all of the old buildings were gone. The new buildings were old already, but they were not one-floor! They were all multi-story and there was a “new” gate. There was also a new bridge over the stream separating the road from the campus. It had just a totally different look! 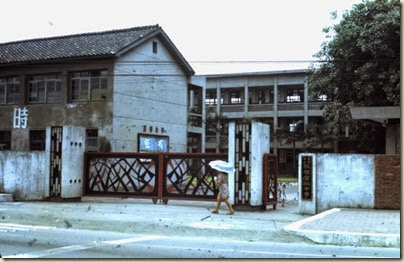 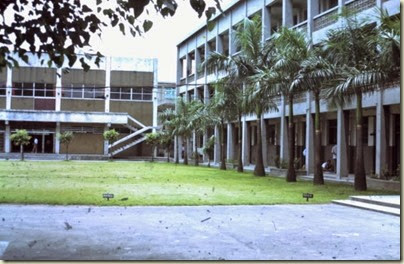 Posted by Just having FUN at 8:46 PM No comments:

From garbage collection, you can gage the degree of progress of a local civilization. Clearly, in a rural underdeveloped place, there was no collection at all. Unfortunately, there are still places in the world where no collection is the rule. In 1975, Taiwan was in a transitional time. The older style collection by humans pulling a cart to collect primarily compostable waste coexisted with a new garbage truck that collected many other wastes, such as plastics, containers, and household cloth. 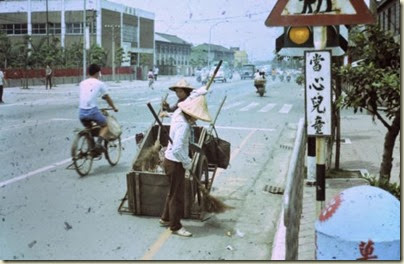 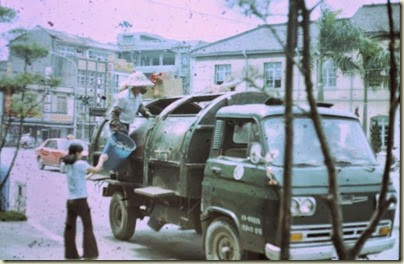 Posted by Just having FUN at 3:28 PM No comments: