Look what I got here!

Yesterday, Janice was cleaning out the garage where we had piled up everything we wanted to save but did not know what to do with, when we moved from Tennessee here to Delaware in 2006. She came upon an old newspaper clipping and some pictures of a few of my students, which had been posted in my office. It turned out that the newspaper clipping was the announcement of my becoming the Chairman of the Chemistry Department at ETSU in 1979. That was the beginning of the job which I held continuously for 22 years (which was a record at that institution). The pictures included one of Sharon Campbell, after she and Brian had their first child. I represented Sharon's family to give her away when she married Brian, just about a year before this picture was taken. The others, pictured below, were of Linda Adams (at the bottom), my first graduate student,  Tony Ellis, my first undergraduate research student, and Jenny Fox (in the middle), my master's thesis student whom I co-directed with my best friend in the department, Boris Franzus! There are a lot of memories behind these images! 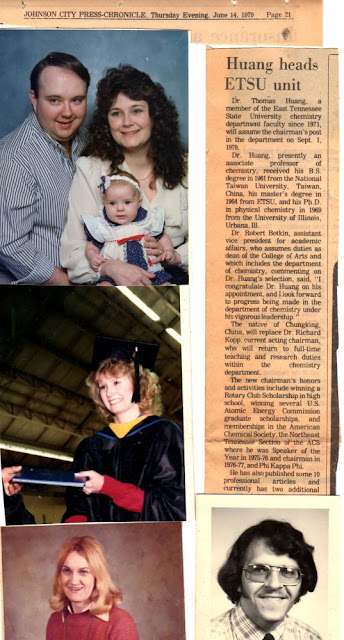