As you know, church music has been in my life ever since I first heard it when I was in junior high school. I did not have to learn to appreciate it at all. After Janice and I got married, we tried to keep up her habit of attending church on Sundays. Good Shepherd Lutheran Church in Champaign, IL, was a relatively new church with mostly young members like us. The Lutheran service was very similar to the Roman Catholic liturgy, so Janice was very comfortable with the service. It did not take long for us to become part of this church community. There was no choir at that time, but I sang special music once in a while by myself or with Linda who was a soprano of about our age.

Seeking God was an important part of my trying to become a good Christian. I was in that mode for a long time. Maybe I was afraid of the answer. It was just much easier to concentrate on my love of church music and ignore other aspects of religious belief. We were involved with Good Sheppard’s youth group also; we even took a group to attend a Chicago Youth Convention. The picture below is a current picture of the Church; the second picture was taken one year after we left there when we went back to be invited to a picnic with some people involved with the church, such as Pastor Carl Kalkwarf,  his wife Faythe, Linda, and her husband. Margaret was in the picture too! 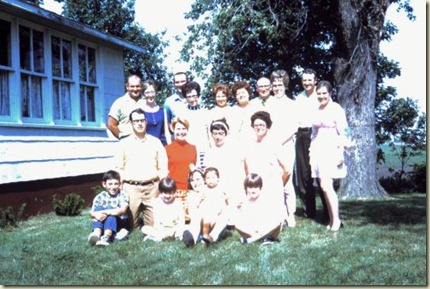