Janice had two roommates to share a small apartment off campus. While they had to drive to school, they had some freedom to cook what they liked to eat. The roommates were Adriane and Kathy, both were enrolled in the Chemistry Department, in graduate school. All three were Catholics and were very serious about their studies. Adriane's boy friend was on leave from the Chemistry Department in Australia  in 1964. Kathy's boy friend was  in Chemical Engineering. Four of us somehow decided to have a double date and go to St. Louis for a weekend. It was very cold that week, but we had a great time. We went to the botanical garden and the state capital building. We even went to the gas-light district downtown to eat dinner at a restaurant where all the waiters and waitresses were singing operatic or other musical pieces while they served. We were all impressed! 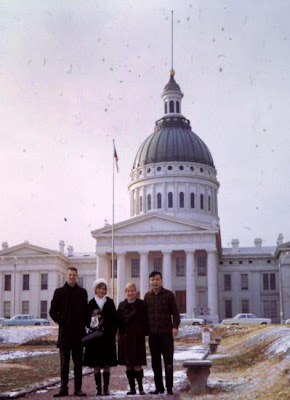