Since traveling to school and back was an important part of our everyday life at Banqiao, the schoolmates who got on and off the train at the same station naturally became close friends. We had time to share both happy and sorrowful moods of the moment, and this provided us with a process of diversion necessary (?) for the growing up process. The following picture was taken to celebrate this togetherness; two students were in my class (left and right front), Chen Jia-jen (陈家 帧) and Sung De-qian (宋德谦), the other two in the second row were not in my class. Zu Je-Ze (徐继志) on the right was in the class next to us; he was a bit older than us and was always the one who stopped us from carrying out our naughty ideas such as jumping off the train and back up while it was moving. I forget the person's name on the left; maybe someone will help me to remember him later. 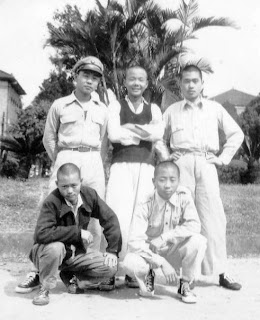 We five had a couple of other pictures taken together as well. 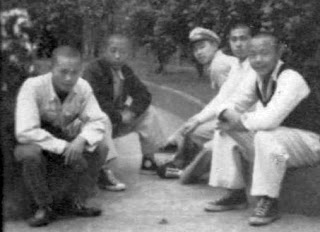 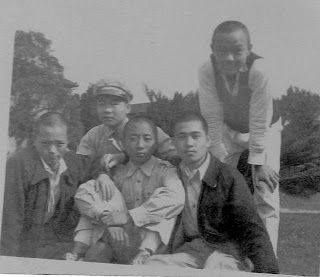 As you can see, we just did not have a lot of opportunities to take pictures together. (My wife tells me that she has no pictures from her junior high days so perhaps we did not do too badly!) Considering the number of years that have passed, it is amazing that I still have at least a few pictures left to show you. I have in my possession one more picture we took as a small group, I forget the occasion for which we were together for this shot. Wu Sing-Yung (吳興蓉) was sitting on the left. Lin Ze- que (林子宣) and Chou Wu-show (周武修) were in the front row and Taotze and I were standing in the back. 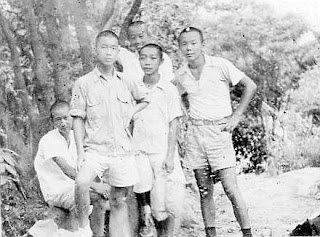