Starting from Junior High until half way through our college education, for a total of about 8 years, we had to "learn and practice" a proper political attitude. In the classroom, we studied the " hree people's principles" or related subjects, and wrote and discussed many papers about the meaning and the actions necessary to achieve the goal of achieving these principles. On the parade ground or the athletic field, we learned a lot of songs, such as "Fight communism and Resist Soviet Russia". Janice asked me if I remember any of these songs; I could not! She asked me why? She can remember clearly all the songs she learned at that age. During my college years, I was even an "instructor", charged with teaching everyone in one of the Training Centers to sing these songs. How can you not to remember any?!!! Well, you can see that my heart was not in it! It was just a routine - doing these rituals without thinking about it. I am pretty sure that I am not the only one to have "two faces" when it comes to following the political path. On the one hand, you learned how to write an essay to get a good grade or sing a song as loud as possible; on the other hand, you know where the reality lies. Fighting communism and resisting Soviet Russia were so remote to us that they made no impression on my mind. The following pictures are good examples: one is a cigarette package, another is a wedding invitation. 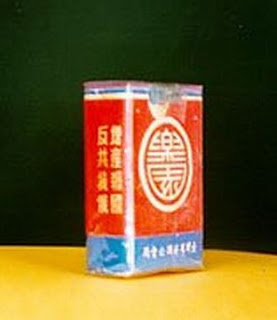 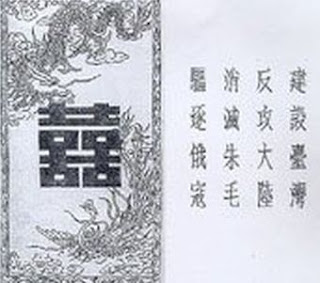 In 1952 October, the Chinese Taiwan Youth "Fight Communism and Save-the-Country Union" (中国青年反共救国团) was officially established. Everyone in school became a member or an associate member. We saw the slogans everywhere! For example, another slogan, "Kill the pig and plug out his hair, fight commies to return the Mainland" (杀朱拔毛，反攻大陆). "Pig" in Chinese sounded the same as "Chu" (Chu De was a famous Chinese Communist Marshal) and "Hair" sounds the same as "Mao" (as in Mao Tze-dong). These slogans were printed on the bus or train tickets, on the cigarette packages, medicine bottles, and certainly on large and small public buildings. The over-whelming amount of propaganda saturated the whole society. My defensive instincts just automatically tuned them all out! The following cartoon depicts the life, another aspect of many slogans, in mainland China during that time. 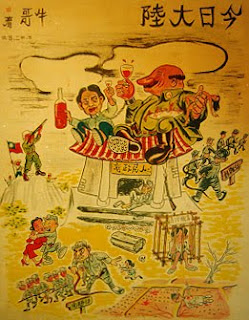 Another worry of the Chiang Regime during that time was communist spies among the general public. Therefore slogans about preventing spies were also posted in every corner of all the cities to alert citizens' attention. 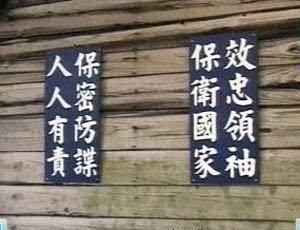 There is a song on you tube with the name "Fighting communism and Resisting Soviet Russian", maybe you like to hear it: :http://www.youtube.com/watch?v=oeOsL-OffdI