We moved a lot during the war

The Japanese invasion of China started to move inland just before my parents got married. The war started in China’s northeast Manchurian area. After the rape of Nanking in 1938, the war front extended into the western parts of the country. My newly-wedded parents escaped to Sichuan that year. I was conceived in a small town named Bardong, along the Yangtze River. The place is about 120 miles east of Chongqing. (See the map below).  It is on a slope of one large exposed hill on the left side of the river as you go up stream. When the Japanese started to bomb the area, there was just no chance of surviving in that place. My parents moved immediately. 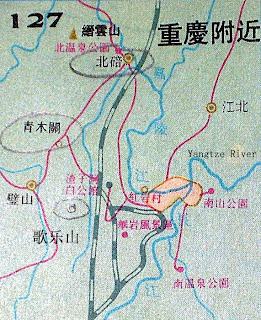 Chongqing area map, the center of Chongqing is the pink area.

I was born in Gouloshan (歌乐山). (See the bottom one of the three circled spots on the left side of the map, it is in large black characters). It means Song-Happy Mountain. I do not know if this has anything to do with my love-of-music character or not, but it sounded natural.  The 24-hour bombing started in 1940. Our family moved more away from the center of Chongqing and Dean was born in Chingmookuan(青木关), north from Gouloshan。It means Green-Wood-Gate. By that time, food became scarce, and mother did not have enough milk for Dean. All her life, she was partly apologetic and partly cursing the Japanese because Dean had to drink boiling rice instead of her milk, which caused Dean to be small and unhealthy. Two years later we moved again, this time to Beipei (北培), the top cycled town on map, where our sister Huang Tao-pei was born. (This sister later died in Taiwan). She was nick-named “Peipei” after the town’s name. My mother liked to use double words in a name to express intimacy. For example, when Dean’s daughter, Deana, was born she was called Shin-shin, the happy one.  And our daughter Margaret was nick-named Pan-pan, the long expected one.

When the war was over in 1945, we moved to Nanking! There were five moves in six years for my parents, which was very common for the lucky couples (they survived) during this eight-year turbulent Japanese war period.
Posted by Just having FUN at 3:20 PM