The reason that I am going to talk about my cousins here is because they played a very important role in this Chinese family.  “Cousins” often played important roles in many Chinese families during this period, the bigger the family the stronger the connections, which provided strength for the family. This tradition may have changed in later years, but it was very important in our parents’ minds.
When my parents were introduced by their mutual friends for marriage, they were both passed the marrying age of that time. My Father was thirty six and Mother was twenty eight. They had another common responsibility in their respective lives. My Father was supporting five of his siblings’ children for their education (three of the five lived with him), while my Mother had two of her siblings’ daughters living with her to get their education in the big city of Wuhan.

I have in my hand a picture of my Father one year (1937) before he got married, this will give you a glimpse of his life then: 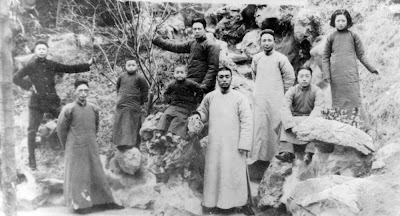 In this picture, my Father is the third one from the right. The first two on the right and the one on the far left are my cousins Tao-fong , Tao-whi,  and Tao-bean, who were living with Father then.  The fourth from the right is my Father’s older brother who is the father of these three cousins, and of Tao-ping (fourth from the left) who was six at the time, and of six others who are not in the picture. The second from the left in the picture is the husband of my Father’s sister and the third from the left is his son. The one in the center back is ather’s secretary.


The two daughters of my mothers’ siblings, Hwei-shen (on the right) and Fushen (on the left), are shown in the picture below, which was taken much later, in Nanking, in 1947. My Mother and my sister who died later in Taiwan are also in the picture. 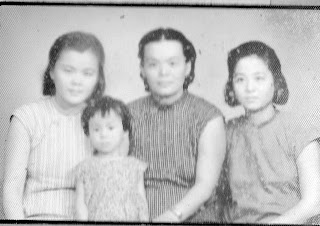 When my parents got married in 1938, all these cousins were teenagers. They were forced to live together and to make adjustments. Can you imagine the problems the five teenagers encountered? My Mother never in her life got over this collision, and was never able to forgive the Huang cousins; while my Father was somehow never able to realize that there were problems among them. After so many years, you could no longer tell where it started, and what the results were, etc.  My siblings and I certainly could feel the heat throughout our lives. It was very difficult for us to deal with this conflict when we were young; as we grew older, the problem became ours no longer. It had totally returned to my parents.
Three cousins came to Taiwan and intertwined their and their families’ lives with ours: Huei-shen (we call her Hwei-gou) from Mother’s side and Tao-fong (we call her Xiao gie, or little sister) and Tao-bean (we call him Er-gou, or 2nd brother) from Father’s side. When I was young I liked Huei-gou. I talked with her quite a bit and shared a lot with her. I treated her as my sister. Xiao-gie certainly helped me quite a bit. For example, when I came to the US, she paid for my air ticket, as it cost so much that my family could not afford it and I certainly could not even imagine the figure. Another example will show why I described our lives together as intertwined. All Xiao-gie’s children address me as their 9th uncle, even though some of them are close to my age. The reason is that Xiao-gie has 8 male siblings in her family. I am the continuation as her ninth brother, thus the ninth uncle for her children.
Posted by Just having FUN at 8:44 AM