There were quite a few events which occurred in our lives during 1985. Some were huge and complicated, including one big China trip which involved the whole family and which was reported separately elsewhere on the net. (Please see http://jat.esmartweb.com/china-1985/china_1985.htm for details.) Here, today, I want to report on a "small" trip which we took to see one of our favorite relatives, Janice's aunt  Florence Crossland, whom we always called Aunt Flo. It turned out that that trip was the last one we took together to see her, as she passed away not too long afterwards. From time to time, even now, we think of her and remember the love and kindness which she always showed us. She is deeply missed. She participated in many activities with our family whenever we visited the Boston area. For example, when my Father came to visit Boston and the Cape in 1972, she greeted him warmly. The following pictures were the last two pictures taken with her during our visit in 1985. At that time she was living on the Cape with her daughter, Marjorie. She was very alert and certainly happy to see us! 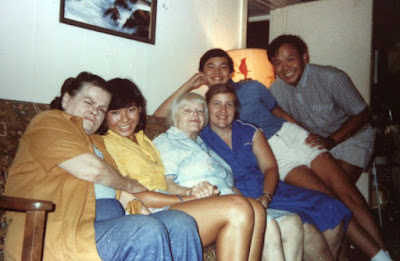 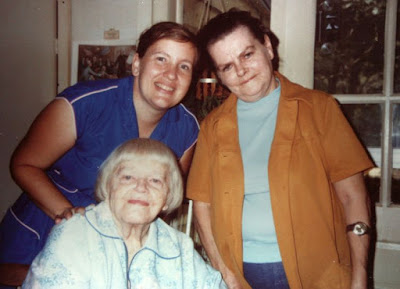 Janice wants to add a few details about Aunt Flo's life: She was the youngest sister of Janice's Grandmother. Part of a family with 9 children, they grew up in Truro, Nova Scotia, in Canada. They had an older sister Sarah, who became a Sister of Saint Joseph and taught first grade in Quincy, Massachusetts, for more than 40 years! Flo married William Crossland after she came to the U.S. They had only one daughter, Marjorie. Uncle Bill's work took him to various parts of the country. In 1942, when Janice was born, he was working in Tennessee, where Janice's Father was also working at the time, at Holston Defense since it was during the Second World War. Later Flo and Bill lived in Richland, Washington for several years. They eventually returned to the East Coast. Janice remembers visiting them in Holyoke, Massachusetts. She and her sister would take the train down from Winchester and stay for a few days. Aunt Flo always provided many wonderful activities for the 2 girls during their visits! Later, after they settled in Winchester, Janice and her family were able to see Flo and Bill frequently. Sadly, Uncle Bill passed away in 1963. For a while Aunt Flo lived in a home run by Catholic nuns. However, she later decided to live with Marjorie on Cape Cod.
Posted by Just having FUN at 8:58 AM