As you know, Taiwan is long and narrow, with high mountains(12 thousand feet high) in the middle. The widest horizontal line is less than 90 miles and the longest north to south distance is about 250 miles. It was once “discovered” by the Dutch and was named “Formosa” on western maps continuously, even though the Dutch were later kicked out by a general in the Ming Dynasty. The map below will give you some idea about the island: 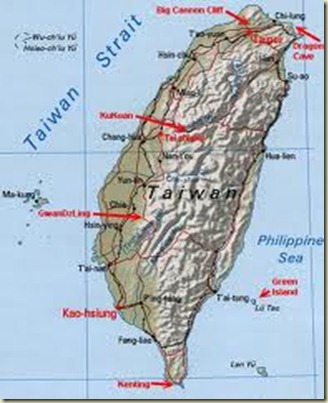 Father made some arrangements for us, especially Janice, to take a trip south to visit the island. We will show you several places we visited on this trip south in the next few blogs.  Taiwan at that time had less than 16 million people. Today the population is starting to level off with more than 23 million.