The official name of the College of Medicine at ETSU

At the end of one of our family picture albums from 1984, I was surprised to see the two pictures below together on one page. They were developed at the same time, too, and at the same place. One picture shows Janice with my close friend, Dr. Paul Dishner and the other is of myself with the then president of ETSU, Dr. Ronald Beller. 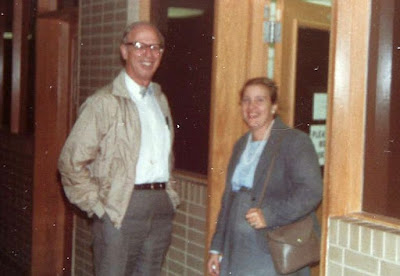 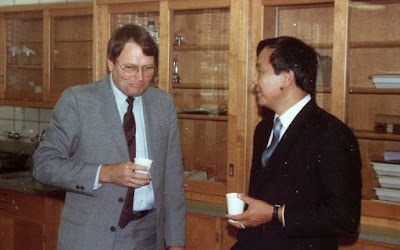 Both men were attending a Chemistry Department function to celebrate the purchase of a piece of major equipment (I believe it was a new Mass Spectrometer). At that time, the college of medicine at ETSU still had the official name: Quillen and Dishner College of Medicine. Dr Dishner's name was included originally because he donated a significant amount of  his personal money for the creation of the college. Later, Beller had some problems with Dishner and he worked very hard to remove "Dishner" from the college name. It took several years but this was eventually achieved. In later years, no-one wanted to remember the original name and Dishner did not even get his money back, as far as I know.  If you want to check the facts it is difficult to do as the history has been buried. It is amazing that human beings have distorted the story and we really do not know what was "true". One fact I know for sure is that Paul was a very competent physician who practiced in California and he later became a personal friend of mine after his retirement. He came back to live near his home town in East Tennessee and he helped to establish a medical college in the area during the time when D.P. Culp was the president of ETSU, when Culp could not get any support from others!  And most importantly the medical college had removed the "shortage of medical doctors" problem of this area permanently!
Posted by Just having FUN at 4:37 PM