There was no question that the participants, who were from all over China, were very curious to find out what was going on in the USA. China had closed the gates to the outside world for close to thirty years and they were eager to find out what had been happening outside their doors. I found out that  they had had no access to Chemical Abstracts, which was and still is the only literature recording all that happens in the field of Chemistry. Without access to CA, a chemist is like a blind person! One would not be able to accomplish anything - either in research or in teaching! I was also very curious to find out what had been happening there, in the country where I was born and where I lived until the age of 10. So we met in a very large classroom, talking about the conditions which I experienced daily in the USA, but which were brand new for all of the people there! I am posting below two pictures, one colored and one black and white (which is better for identifying who was there). These pictures were taken in front of an old school building in Beijing. Beijing Normal University was the first public university in China and was established in 1902. 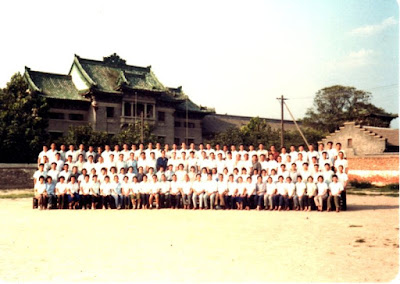 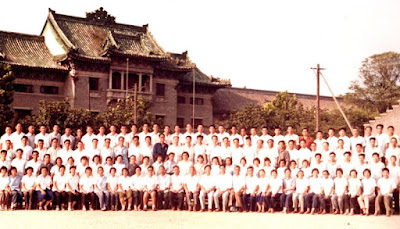