At the Lo-wu Chinese entrance check, I remember that the officer checked my luggage carefully and that he was very interested in the two copies of the ETSU students' catalog. I do not know how much he could read English, but the pictures in the book were what he was concentrated on. It took a while for him to check but I was released without any problem. Then I got back on the train to go to Canton, where I was picked up by an official from the Ministry of Education who took me to the airport. When I finally  arrived in Beijing, it was already 8PM at night and no one was there to meet me. I called Prof. Hu and he came with two faculty  members in the Department to help me to get to the Friendship Hotel which was located near all the Universities. Clearly they were very tired by the time we arrived in the room. But it was day-time for me! I took their picture in my room and thanked them for their trouble before they left to go home. This was the starting point of my China visit! 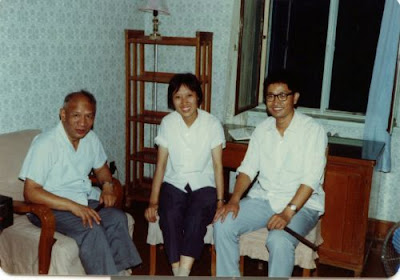