I once had two more siblings!

Up to this point, I have not mentioned anywhere that I had two additional siblings. They both died before I was ten, and I really do not remember them very well. Just a couple of days ago I found a picture which I took at my cousin's Taiwan home at 2011. It is a copy of one in their family album. I realized that both of those siblings were present in this family picture taken in Nanking, most likely in 1947! And this may be the only picture ever taken of the boy, born in 1946, who died before we left Nanking and moved to Taiwan in 1948. His image is not clear in the picture, but I could recognize him. He is in front of my father. I was the oldest boy in the front row of children, first from the right side. The sister who died in 1949 was next to me and in front of my mother. The boy next to her is my brother (now called Dean). The four adult men standing were my four cousins with the oldest in the center of picture. The center one of the three adult women standing is Xiaoji, sister of the four brothers. The other two were wives of the male cousins. And I am not at all sure about the identity of the two young girls in front on the left side. 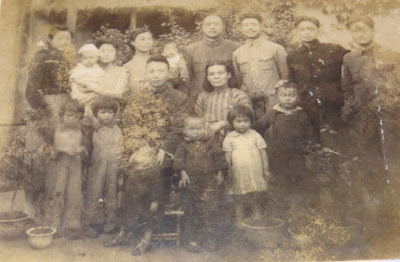 The picture below was taken in Nanking with two of mother's relatives. Hwei Ge (on the left) was the daughter of one of my mother's sisters, and Fu San Je (on the right) was the daughter of another sister. My mother was helping to raise both girls. The child is my younger sister who died in Kaoshung shortly after we arrived in Taiwan, because of the lack of medicine to cure her infection, My mother felt that girls needed to stay together for one reason and the others, so they took this picture before they separated. (Hwei Ge moved to Taiwan with my parents and Fu San Je chose to stay in the mainland.)  : 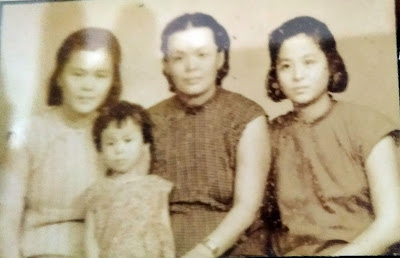