There are always very extra ordinary events which occur for an ordinary Chinese! For me, there were quite a number of them and it is time now for me to describe some of them in more detail, so that they will not be forgotten. In my last blog, I mentioned that I had two siblings who both passed away during the year and a half period when we were trying to escape from the communist invasion. I am now going to add, in this blog, some details about them and about our lives during that time -  especially since I found another, better picture which was taken during that time and which has inspired me to tell more about ALL that I remember. This picture is below: 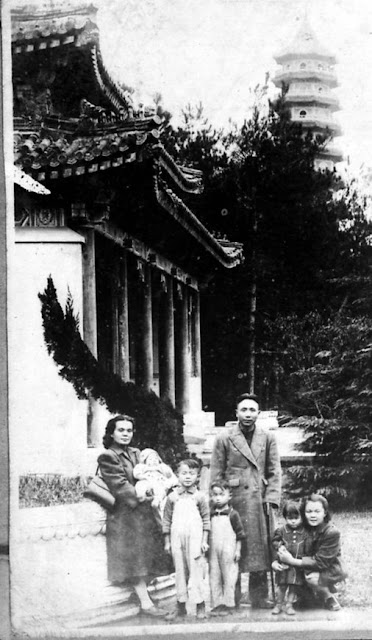 Pictured, in addition to my parents, are myself, my second brother, Dean, our two younger siblings, and my older cousin Fusan Je. I was able to extract a better version of this picture which shows these two siblings  more clearly: 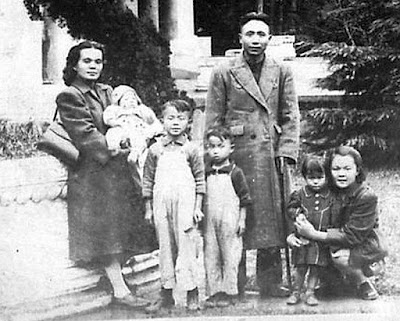 At the end of the year 1948, our family took a boat to Taiwan. Our plan was to return "home" to Hubei after we visited my mother's brother, who had been assigned to Taiwan as part of the force that took over the island afer the Japanese had been defeated. (We assumed that the communist movement would diminish and peace would return to China.) However, shortly before we left, my younger brother died as a result of a re-occuring disease of the stomach called "intussusception", which was recognized too late for the doctors to operate. Before he became sick, he had been a very active baby!

Fusan Je was in Medical School at that time so she did not go to Taiwan with us. My father went back to Nanking to work, after we had arrived and been settled at the home of my uncle in TzoIn, Taiwan. Less than a year later, my sister also died. She was less than 6 years old. She had what started as a lung infection, which then spread to her brain and other places. She could have been cured by antibiotics, but there was no medicine available. When I went to her "funeral", she was lying on the ground beside the hole which had been dug for her, because the coffin which had been bought was too small. I remembered the funny feeling I had. I was not sad, not happy, but it affected me a great deal - now more than ever before!

I did not see Fusan Je again until I was a visiting professor in Wuhan University in 1985, which was
close to twenty eight years later. She was then a physician in Shangtong, China. and she remembered the boy's death vividly when I talked with her about him!
Posted by Just having FUN at 10:15 AM