Music Programs at the University School

There were other musical programs which we were involved with during the time when our children were at the University School. In their early days, there were no special music teachers provided by the school. There was an arts teacher, but the school did not hire a full time music teacher for many years. Sometimes a student's parent played for the children during a special program. Much later the University School did hire a full time music teacher and he started a singing group and some instrumental programs. Although the singing group had some success, those who were in an instrumental program had to provide their own instrument, which was not very easy to accomplish. Clearly, it was very difficult to have a worthwhile music program at this small school of about 6 hundred students spread over all 12 grades. By contrast, in Taiwan, when I was growing up, although we were very poor we always had a music teacher for our class in school. I have a couple of pictures of a performance at University School which did involve our children: 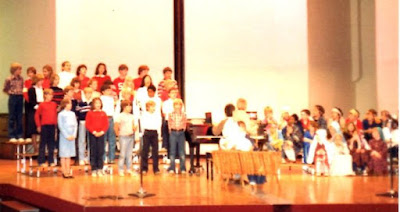