Quite a while ago, I talked about the wedding pictures of my parents and our children. See post on April 6th, 2010 at this blog,
At that time, I did not have wedding pictures of Janice’s parents. A couple of their wedding pictures have just become available to us. I had them scanned and I would like to post them now. Clearly, their wedding pictures were a lot more informal than my parents.  They did not go to a studio to have their picture taken. They were just outside in the yard with a few of their relatives and friends. All four grand parents of Janice were in the picture. Her father’s parents were Merritt Lyndon and Margaret Howard Grant Fernald and her mother’s were Earl and Margaret Ellen Smith Wyer. Merritt Fernald was a well known biologist who taught at Harvard University. Earl Wyer was descended from a whaling family who lived on Nantucket. He drove a trolley car in Boston. Margaret Wyer was born in Nova Scotia. Janice’s mother’s cousin, Marjorie, was at the wedding as the flower girl. Aunt Dot (her mother’s sister), who was the maid of honor, and her husband Fran, the very tall man, were also there. Janice does not know who the name of the best man. Her father’s sister, Katherine, is in the picture. Since they were not allowed to be married inside the church, they were outside the rectory taking these pictures, we believe. Two women in the second picture might be friends of Janice’s mother, whom we could not identify. 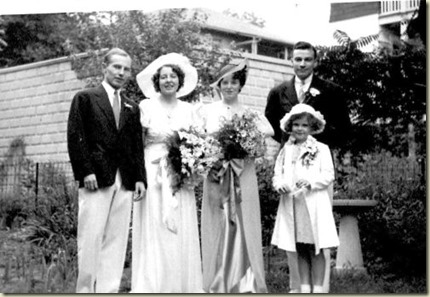 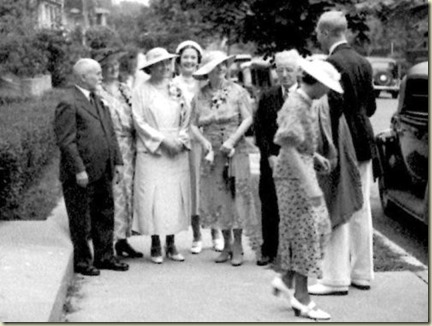