At the Beginning of the Computer Age

While the first actual computer might have been built  in the early 1950’s, the first practical and useful computers began to be widely used by the scientific community in the sixties. Since my doctorial thesis contained both experimental and theoretical aspects, I used a lot of computer time. The IBM 7090/94 was used daily for my work. We learned(took short courses) some uses of machine language, and used FORTRAN on all our programing. The rate at which we learned to use this new technique was as fast as the rate of increasing computer speed. It was amazing! The demand for both computer speed and storage space matched the development of new hardware. My thesis relied on punch cards, batch execution, coding, compiling, and waiting patiently for results. Such terms not used any more nowadays. Let me explain. For our theoretical work, when we first started to use a computer, we began by coding our program – usually according to our mathematical formulation. Then we had to compile our program to see if the computer understood what we tried to do. Then we would test our program with known data before we could apply it to our own experimental data. The data themselves were usually added at the end of our computer program, all of them having to be recorded on punch cards. The punch machine, a punch card, and a box of punch cards are shown in the pictures below. They were used only for a decade or so! Can you imagine a way of life that changed in less time than a fourth or less of a generation. 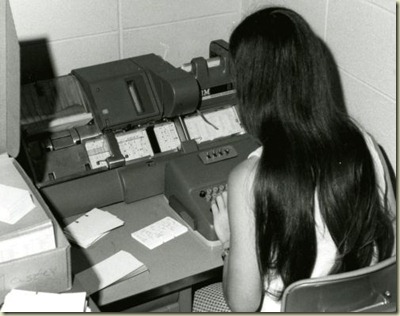 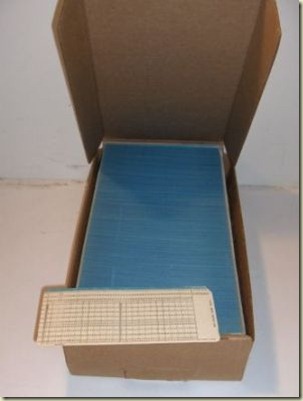 My coded program consisted of almost one full box of cards (more than one thousand program lines). After being  compiled, the length would shrink to about one third the size. Janice would walk with me to the computer center to deliver the program and put it in the queue to run over night. Since longer programs were only run at night, we had to wait, and wait! Janice and I would go to a movie sometimes while we were waiting. This kind of experience was typical at the beginning of the new computer age!