Every Chinese kid knows how to play this game.  Generally, you learn this game as soon as you enter primary school. You do not need any equipment, and you could use it in any occasion. I was told that US kids play a similar game. Whenever you need to make a decision without prejudice, you can use this game. In the US, every sport game generally starts with a coin tossing to start a game, I am not sure when did they start this tradition. It is taken for granted now that this coin tossing is the way to start the game. Even Olympic game has adopted this tradition without any argument.  This simple game was used to make such decisions.

This game is called “scissor, rock, and cloth” (剪刀，石头，布). You use one hand to represent these three items, as shown in the following pictures: 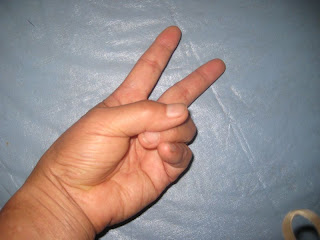 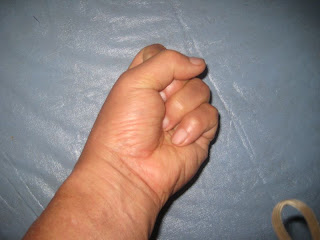 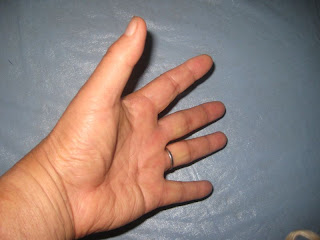 Cloth can cover rock, rock can break scissor, scissor, of course, can cut cloth. The cyclic functions of these gestures make the game fair. One of the two people can decide who goes first, or who win, by calling out together “one, two, three”, followed immediately by displaying one of these three gestures. One of the two will win, or both have the same gesture, you just repeat again until one wins. Try this with a Chinese, he or she will be surprised that you know this game.
Posted by Just having FUN at 7:17 PM