Hart Island reminded me about Another sad Story

I talked about two of my siblings who passed away as very young children in this blog on Oct.10, 2019. Today, I will talk about one of them. This morning we heard a story on the CBS Sunday Morning Program which made me think of her. The story describes Hart Island, which is the burial ground for all the people who have died nameless in New York City hospitals, when the doctors could not save them.   The story focused on a lady who lost her daughter as an infant during a major snow storm. The child died of a heart problem and the lady could not get to the hospital because of the storm. The hospital sent the child to Hart Island but only told her mother she was sent to a NYC burial ground. It was only recently, after 25 years, that her mother learned the name of Hart Island. Unfortunately, there are no grave markers there.

This reminded me of a sad story in my own life. I had a sister who died in ZuoYing (Taiwan) in late 1949 or early 1950. She had an infection and we could not get any medicine for her. I was ten at the time and we had recently arrived in Taiwan after fleeing from the Communists in mainland China. I remember the scene vividly. Our family, including myself and my eight-year-old brother, Dean, went to her burial "get-together". The hole for her casket had already been dug. My mother was crying loudly and my dead sister had been placed on some kind of board near the hole. My father asked us to bow and say good bye to her, which we did. Then we were asked to run away. Later I found out that my parents were waiting for a burial casket, as the first one purchased was too small.  My uncle (my mother's brother) went to have another one made by some of his soldiers at the station. Later, I found her burial place covered with a small pile of dirt. When we went back to Zuo-Ying in 1969, I remember that we went there to look for her grave. But, I could no long find that pile of dirt - the whole area had been built up with new roads and everything was changed. The picture that I had in my mind was no long there!!

The only pictures I have of this sister were cut from some of my group pictures! 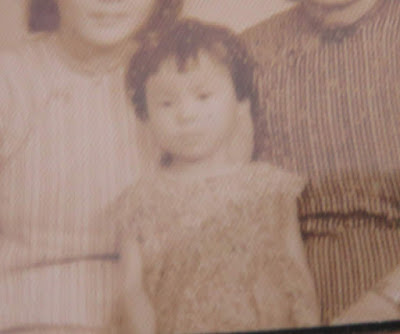 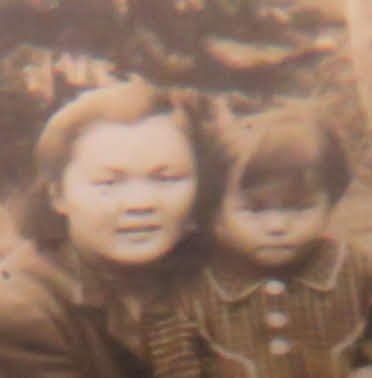