Soccer was not a popular sport in the USA in the early 1980's, especially compared with baseball. (Steven did start baseball practice in the first grade and where they played so-called T-ball.) However, for the soccer team we had a very enthusiastic coach, an ETSU student from South America who volunteered to coach Steven's team for a couple of years. There was no formal organization. They just had some fun games whenever he could arrange one. There were quite a number of adults involved. We had this picture taken and I do not remember the exact date , but it was definitely in 1981. You can see our good friends, Otto and Prudy Zinser, the parents of Kurt, and Bob Lapella was there also as his son, Alex, was on the team. The Foreign Student Advisor was there in the picture, as the coach was a foreign student. Frank Newby was there too, as his son Peter was in one grade lower at the University School and played on the team. So it is a very interesting picture! 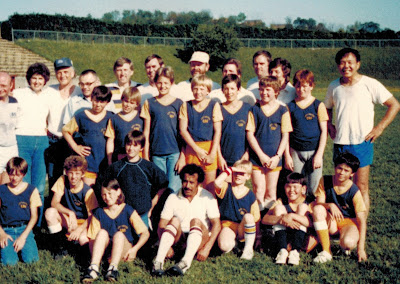