The peak of the Civic Chorale during my tenure

It is very difficult to say when the Civic Chorale reached its peak during the years I sang with them. Actually, there are no set criteria for making such an estimation for any group. However, I will present my personal choice for that peak time, based on the following evidence.  The Civic Chorale started in 1973. Officially it became a Tennessee state non-profit organization in 1976. In 1981, we reached the ideal size for a chorale, with a good distribution of different parts. Our director, Robert Lapella, was in his prime and many, if not most, of the members were also enjoying their best years for singing. In 1980, the whole group went to Nashville to perform at the opening of the brand new Performing Arts Center! In 1981, we even had a singing group from England come to visit us and, in 1982, we went to perform at the Knoxville Worlds Fair. Therefore, I have decided that, in my estimation, this period of three to five years were the best for the Civic Chorale. I have a nice picture of the whole group taken in the Milligan College Auditorium. 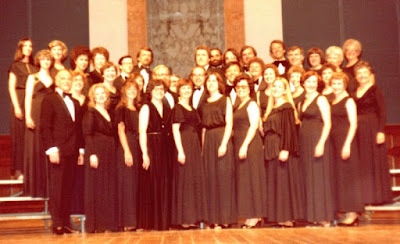