Everything is sold here!

In 1975, Taiwan’s economic situation was still lagging behind the rest of the world. It was trying very hard to break out of the pack in Asia. However,compared with Hong Hong, Taiwan was still trying to catch up, even though Taiwan had much more potential, both in labor and in intellectual potential.  It took three or more years before we saw the turning of the economic future to the bright side. However, even in 1978, you could still see an individual selling everything you might need in a household by pulling his cart mounted with EVERYTHING! This person could still make a living for his family at that time. But it was getting much harder, as his cart carried more and more stuff, and he was running out of space! I took this shot with Steven and Janice in the background on the street near where we lived. 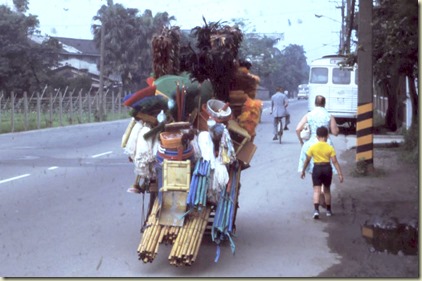