Some Other Colleagues at ETSU

There were a couple of important colleagues at ETSU and I should mention them here. One was important, first of all, for my collaborative research projects. Boris Franzus came from Esso Research in NJ. He was an outstanding organic chemist. Not only did he have a lot of good ideas in research, he was also very able and very funny. More importantly he was an outstanding teacher. He knew how to explain complicated concepts and everyone in his organic class worked as hard as they could for him! We enjoyed each other enormously, and became very close friends. He and his wife Betty were even close to our children. It was certainly a blessing for us to get to know them and became such good friends. The picture below was taken in his office: 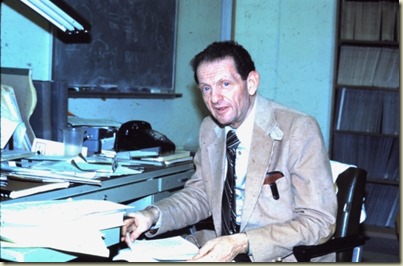 There were a total of nine full time faculty members in the Chemistry Department. You would think that this should be a simple harmonious unit, but it was not. I will certainly have more to talk later about the politics of this small academic unit! In 1973, I took another picture of a faculty member in Chemistry, Jeff Wardeska, who turned out to be a very reliable person. He was a man of few words, but very honest. You could trust him to do the right thing, which was important! 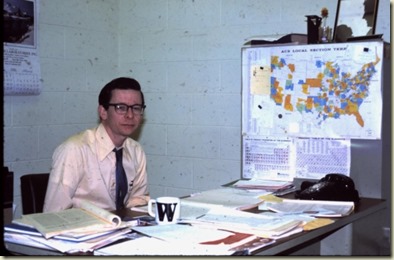