In 1966, Mao Tze-dong started the culture revolution (we now know) to solidify his political position in China. Most people in the US thought that it only affected China. That was, of course, true for a decade. It changed China in every way you could imagine. It also changed the discussion focus in the US for students like us who had come to the US for educational purposes. Janice and I took one weekend and drove to Chicago to visit my classmates from Taida in Chemistry. George Ting and Chen Ming-yi were my study mates when we were in Taida. At the beginning, we did all the calculus exercises together during the freshmen year. Then we continued to study together until graduation. They were then both enrolled in the Chemistry Department at the University of Chicago. To our great surprise, both of them were much on our left side…  they supported everything Mao did, felt that Mao was the true salvation of China. Janice and I had a hard time there to argue the opposite. There were definitely two distinct camps in the US for us going-aboard students. Below is a picture of George at the U of Chicago, it was quite a weekend for us to be there! 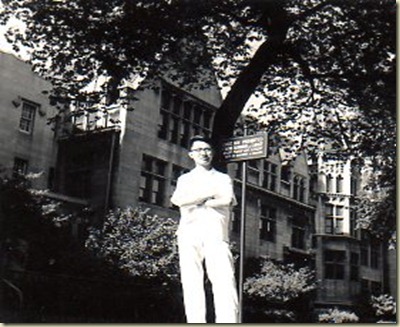