Our Su-su came to join us sometime after we moved to our new place in Taipei in 1954. He was a refugee in Hong-Kong from the same county where my father was born, which was Huangpei county in Hubei province. Somehow my father recognized that he had come from the same place and made all the arrangements for him to join us in Taipei. My father also arranged a job for him in the University. We were told to call him "uncle" in Chinese. The picture below was taken in 1981. 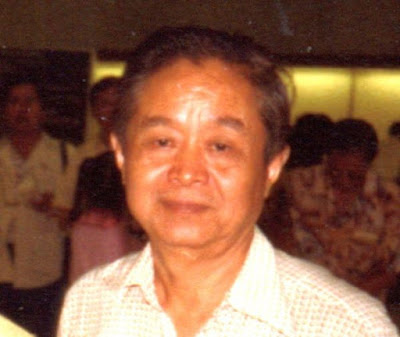 When we stayed at the Guest Professor Residence area, Su-su was the person who took care of all the arrangements for the professors living in the compound. One of the families staying there as residents was part of the extended family of Confucius, in fact part of the 79th generation of direct descendants. Su-su asked the head of the family to do us a favor by writing the doublets shown below as a gift. He agreed and later presented us with the beautiful calligraphy.

The words on the right side of this doublet state that this was written for our enjoyment with our names specified. On the left side is the signature of the calligrapher. In the middle, the two panels paint a picture in words. Each individual who reads the poem will have a different interpretation and envision a different scene. That is the interesting part about calligraphy!  The scene can even change for one individual over time. In this case, the words on the two panels are matched, in that nouns, adjectives and numbers are all paired with a similar structure on the opposite side. Here we have
on the right side: "Flat bridge, wild stream, two thousand pages of poems"  and
on the left side: "Far tree, isolated village, a moon across one curtain".
I hope that you will enjoy reading these words written by a direct descendant of Confucius.
The doublets have been a treasure in our for home many years!