Again on the Cape!

Janice spent her summers on the Cape every summer since she was five or six. We tried to go there at least every other year. Summer was a long season. People came and went at different times. It was not always easy to have all the visitors take one picture together. In 1979, we had one picture taken of ALL the regular visitors. These included all three generations of the Fernald Clan, as well as our close friends the Pauls. Clearly it was a golden year! Many were even in their fancy costumes, which were used for performances during the summer evenings. That was just one regular activity. Others were swiming, clam digging, fishing, whale watching, taking a trip to Provincetown, climbing the sand dunes, and certainly taking walks on the beach! 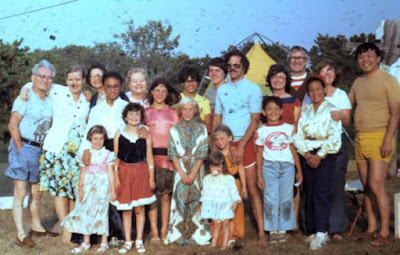