Where there are human beings, there is politics. In a society of intelligent people, there will be different points of view, there would be conflicts, and these would result in  some “give and take”. And, good or bad, politics would be there to sort out “the best outcome”. After Dr. Nicholson retired in early 1978, his choice for a replacement for his position as Chair of the Department of Chemistry, Dr. Robert Snell, was vetoed by the University administration. The chair position was temporarily occupied by Dr. Richard Kopp, who was thought to have no conflicts with any members of the Department. I was on the search committee for an external chair. Just before the Christmas vacation, we were told that the University did not have enough funds for an external search and we had to change direction and search internally. Another committee would be formed. I resigned from the old search committee and seriously considered becoming a candidate for the chair of the Department. This event caused a big loud explosion at the time for everyone in the Department, even though everything in the Department still went on as if nothing had happened. Students still met in the lab doing their experiments, went to their classes, took their quizzes, etc. Who could imagine that this would be the biggest turning point of the Department. The picture below was my vacuum line, it gave me stability and some calmness when I needed! 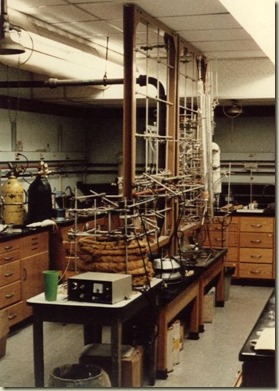