Chinese people have a saying: mind your own business, you cannot change the world. It was definitely true when the Japanese attacked China. China was so weak, from every point of view, that individual Chinese could not do anything but try to survive. First of all, the Chinese were very poor. They were trying to find out  where and how to eat the next meal most of the time.  How could they think about fighting the Japanese? There was very little leadership in the Government. Corruption was rampart as workers were so poor that they had to look for anything extra to survive. Poverty is the root cause of losing human dignity. When you are hungry, it’s hard to have honor! Every one was hustling for whatever he or she was trying to achieve or to gain, no matter how small, to get the maximum advantage possible. It could be trying to get a few more green beans after you bought a bunch from a vendor, or just trying to get ahead of one person in a long line to buy a ticket. It was under these kinds of conditions, that millions of us were brought up. Life was very precious to all your immediate family members, but worth nothing outside that circle. It’s none of your business, including another person's life.

My parents, Huang De-Hsin(黄德馨) and Chen Sau-Mei(陈寿梅), were married in Wuhan in 1938. They moved with the Chinese Government to Chongqing soon after the wedding. At the beginning of the war in 1937, the Chinese army fought with the Japanese directly. It was clear that the Chinese army was not in the same league as the Japanese. Large numbers of Chinese defeats, compared to few victories, eventually led to the strategy of stalling the war. The Chinese army no longer faced the Japanese army directly “face to face”, but fought them with unexpected sabotage.   Large areas of China were conquered during the early stages of the war, but the Japanese advancements began to stall in mid-1938. China did not have any air force, for practical purposes. The Japanese started to bomb China at will. In 1940, they started to bomb Chongqing 24 hours a day in the hope that China would surrender due to exhaustion. I was born in a hospital in Chongqing in 1939. Mother was in the hospital for more than a month. It is still a Chinese custom for a mother to have a month of rest after giving birth. They call it “making a month”.  The ladies there even formed a chorus group to enjoy their lives in the hospital. They were lucky, as the Japanese soon started to bomb day and night. No one stayed peacefully in the hospital for that length of time ever again. 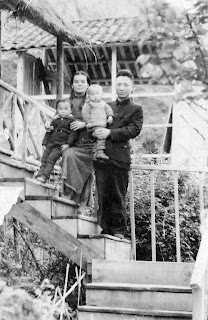 Our family moved quite a number of times during the war. My parents first lived in a small town along the Yangtze river, Badong (巴东).  Then they moved to Gouloshan (歌咯山), that’s where I was born. Dean was born when we moved to Chingmookwan (青木关) in 1941. By then, the hospital had already moved practically to a cave, no more month-long stays, or forming a chorus.  The situation had deteriorated greatly, at an accelerated pace, by 1941; there was a shortage of almost everything, including food.  Mother did not have enough milk for Dean; he had to rely on boiled diluted rice for his main food supply. My mother repeatedly reminded us over the years that this was the main reason why Dean grew up smaller than I did. That might be true, but it did not affect his intelligence, that’s for sure. Dean grew up to be a very smart one in the family. That must have been the most difficult period in the war, as we had no vegetables to eat or other fresh food. Only the preserved turnip (榨菜) was available, day in and day out. Or you could dip your rice in soy sauce to eat it with some taste.

There was a repeatedly-told story of an event during a Japanese air raid when more than 4,000 people were trampled or suffocated to death, first trying to get out of the cave shelters and then trying to return when the sirens started again, on June 5, 1941. I was just two years old and mother was very pregnant with Dean.  As usual, when Japanese planes came, mother would take me to the cave to avoid the bombing. On that special day, mother instead did not have time to get to our usual cave; she just went to a nearby, less secure, smaller cave for hiding. Father came to the usual cave after the raid to help mother to get out but found that thousands people were dead at the mouth of that cave. He thought that we all were the victims of the horrendous, tragic, mass-panic accident. He was crying outside the cave, as he thought that he would be all alone by himself, when he saw my mother walking over holding my hand at her side. You just have to wonder how many stories like this, good and bad, there were during the war.

There were wars in our home, too, during this period. When father and mother got married, for practical purposes, they tried to marry two separate families. For these two young people, they had no idea how difficult a task they were facing. Let me tell  you this story from the start. Like good responsible persons, they took the responsibility of raising some of their siblings’ children. Mother had two of her nieces living with her. Chu Hweisheng (朱慧生Hweige) was a daughter of mother’s older sister and Chen Fusheng (陈芙生) was the daughter of mother’s second older brother. Father had even more of his nieces and nephews living with him and depending on his support for their education. There were initially a total of  six young ones depending on them in Wuhan, but only three followed the married couple to move to Chongqing. As you can imagine, this new couple started a family with a total number of six teenagers, all trying to stake out their territories and ready to protect their “rights”. You have to wonder how in the world they could handle the situation. Well, they did not handle the situation well; this conflict formed a gap between the two newly-wed young people. This gap was there throughout  their lives. It was brought up every time they fought; every one in the family heard about and saw this gap repeatedly. My father was thirty five while my mother was just twenty seven when they married. All six of their protégés were teenagers at that time. Can you imagine two inexperienced young newly-weds trying to manage six young adults, some of them not much younger than the two newly weds. I suppose the fortunate part was that all of them had to travel to their respective schools, where they usually stayed during school days. Chinese schools met six days a week and many times they would have extra school activities on Sundays. So the chances that all six came home for a particular weekend were very small.  The Huang-Chen family feud continued until we got to Taiwan. I was too young to be aware of all the details of these conflicts, but we have heard our mother's complaints  throughout our growing up years.

There was little said about the day when I was born: were the Japanese bombing? or was it a cloudy? etc. But I was told that mother stayed in the Kuan-ren(宽仁) Hospital for a total of one month. Mother even joined a chorus in the hospital during that period.  One day before I was born, mother had a dream that a pearl snake would join the family. The way my Mother told that story, repeatedly on different occasions, made me believe that it is a very good thing that I came to this world as a pearl snake. Who can tell me what a pearl snake is anyway?

When I was close to five, Mom took me and Dean to take a kindergarten entrance exam. I was told that Dean passed but I failed. No, I do not remember what kind of exam we took, but this was my first failure in my life. Even though I was reminded of this failure all my life, I was lucky that I did not take this failure more seriously, so it did not affect my later life.

The only joyful event I remember during the first six years of my life was when the Japanese surrendered in 1945. It seemed that the excitement was everywhere and felt by every body. Shortly after the surrender, we took a boat to Wuhan. On the boat, the only image left on my mind was that I saw some chickens below, down on the floor board of the boat. In Wuhan we stayed at Cousin Yuan’s home for a short time. I watched my first movie, “A river’s spring water flows to the east”, a very famous movie during that time. The only part in my mind today was that the actress jumped into the Yangtze River at the end. Finally, we boarded a cargo plane to fly to Nanking., where Father’s ministry was located. We moved into a new building, in GonJiao New Villlage(公教), a government developed community for many families with at least one family member in the government teaching and civil positions.
Posted by Just having FUN at 10:50 AM